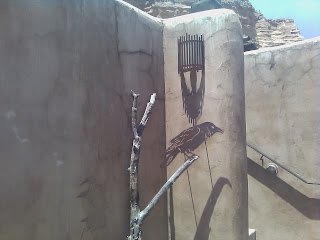 On the way back from Taos, I heard about Ojo Caliente, one of the oldest natural mineral springs around. Well, then. I had to check this out for my next novel. Really, it was all research. And...I unexpectedly fell in love. A couple of dipping pools--try arsenic, anyone? A mud bath. Gorgeous red rock cliffs. AND baby soft skin after marinating yourself. This almost beats out the Korean naked spa. Almost.
Posted by Justina Chen at 5:00 AM 2 comments: 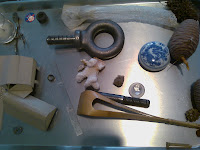 Anybody who comes to my house knows immediately that I love collage. Love it! So the other day, I interviewed Josh Brevoort and Lisa Chun of Zero Plus Architects and stopped midstream...because there by each of their workstations were trays laden with items. A visual collage, changed by whim and informing their work. And this is precisely the type of collage Twyla Tharp creates as she choreographs new dances. And what I do before I write a single word of my novels. Collage as a way of getting to know my characters. My story. My ideas. I love the creative process.
Posted by Justina Chen at 5:00 AM No comments:

Atop of the World 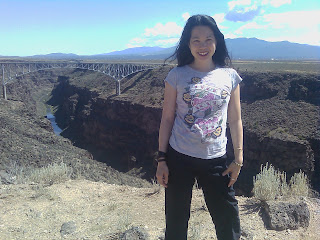 My trip to Taos may have been weeks ago, but I still long for the desert scenery. The wide open spaces. The sunlight. My gosh, the sunlight.
And then this: the Rio Grande. How utterly weird to drive for miles in complete flatlands...to encounter this gouged out piece of land from an earthquake. I can't imagine the power that created this crack. And the hike along the edge? Heaven. You bet this is making the cut in my novel somehow.
Posted by Justina Chen at 5:00 AM No comments: 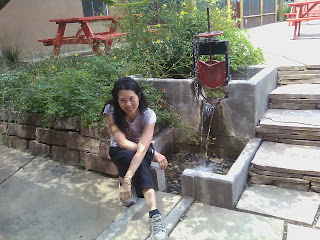 I love waterfalls--natural or manmade. Here, I found one in Taos constructed out of an industrial-looking mechanism. Then the water ran under a footbridge and spilled into a zigzagging waterway that ended in a koi pond. I want this in my frontyard.
Posted by Justina Chen at 5:00 AM No comments:

YAY! I am so humbled by this bit of recent news...and so thrilled that I have an excuse to shop for a new frock to wear to the awards ceremony in November!

NORTH OF BEAUTIFUL has been named one of the finalists for the 2010 Amelia Walden Award given by the Adolescent Literature Action Network (ALAN). ALAN's members are among the most influential librarians, reviewers, professors, and high school educators in the country. The Walden Award celebrates books that show a positive approach to life, teen appeal and literary merit.

This year’s winner was FIRE by Kristin Cashore and the other finalists were:

MARCELO IN THE REAL WORLD by Franciso X. Stork

THE MONSTRUMOLOGIES by Rick Yancey

THE SWEETHEART OF PROSPER COUNTY by Jill S. Alexander

A Toast to Taos 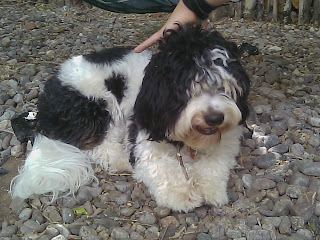 Now this is the picture of cuteness. I am tempted to pack home Jake who literally bounds with joy here at the B&B I'm staying at in Taos.
Posted by Justina Chen at 9:29 AM No comments: 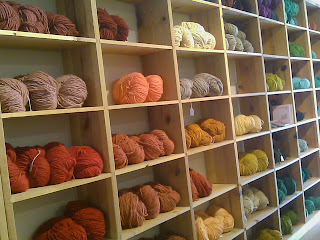 Here I am in Santa Fe and Taos for a few days, researching my next few novels. Every single moment seems to be inspiring me with unbelievable bouts of synchronicity. From the Southwest Weaving store with skeins after skeins of gorgeous hand-dyed yarn...to a dish so delish at The Compound that I'm tempted to learn how to cook beets for myself...to the cutest SmartCar on the planet.
Ideas are every where I look. 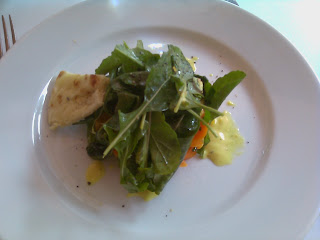 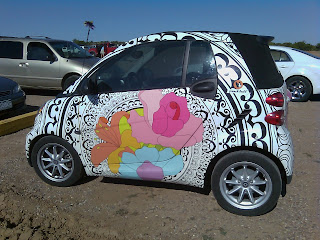 Posted by Justina Chen at 9:17 PM No comments: 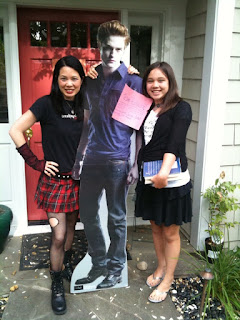 The premiere of Eclipse two weeks ago meant pulling out my Goth-ish get-up. Which is something one of my characters in my work-in-progress novel, RETURN TO ME, would do. Whatever it takes to get me to write these days, I'll take. Even if it means being the only person in the entire theater complex to dress up. Really.
Posted by Justina Chen at 10:46 PM No comments: